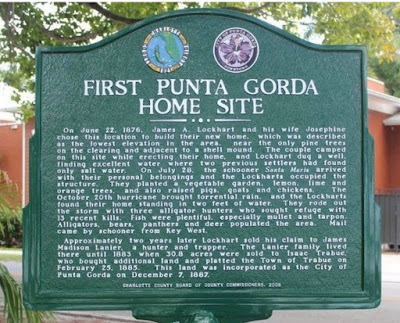 On June 22, 1876  James Lockhart and his wife chose a home site on the south side of  Charlotte Harbor where the city of Punta Gorda is today.  Born in GA, James Lockhart moved to present-day Gainesville.  After serving in Co. B, 2nd FL Infantry and wounded at Gettysburg he and Josephine married and ended up at a new settlement on the Peace River's north shore.  By June 1876 they moved near Nathan Decoster's settlement of Harborview on the harbor's southside where the Punta Gorda Waterfront Hotel and Suites now stands.  The lack of potable water was a problem for earlier settlement attempts.  James found water in his well and they moved.  In 1879 the Lockharts sold out to James Lanier.  Lanier expanded his land holdings and sold them to Isaac Trabue in 1883.  Trabue platted a new town in 1885 which was incorporated as Punta Gorda in 1887.  Marion McAdow was a painter and she painted this picture of the house that was on the land Isaac Trabue bought from James M. Lanier.
Email ThisBlogThis!Share to TwitterShare to FacebookShare to Pinterest
Labels: 1876, first Home site, historic sign 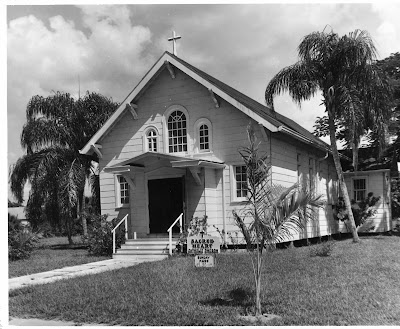 The first celebration of a Catholic mass in what is now Charlotte County is said to have been when Ponce deLeon arrived here in the 1520s, some 500 years ago, but the roots of an actual Sacred Heart Parish start in 1892 when a visiting priest said a Mass in a store at Marion and King Street. A building dedicated to the parish, however,  was not constructed until almost 40 years later.  Until then services were conducted in the  Hotel Charlotte  Harbor.  The first celebrated Mass at that first Sacred Heart Church sanctuary was at 10 a.m on Christmas morning  in 1929.  The original church seated 125 parishioners. The little church was replaced in 1965. And that structure after being badly damaged in 2004 by Charley was replaced by the current church building in 2008.  The church pictured seated 125 parishioners. . 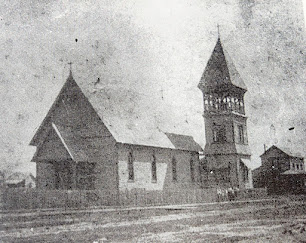 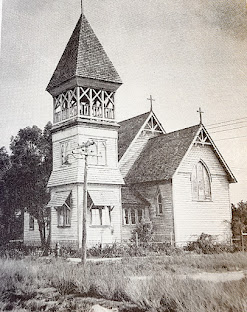 Consecrated on Jan. 25, 1896, as the Episcopal Church of the Good Shepherd.  The church began as St. James Mission in 1892 when Mrs. Virginia Trabue, wife of Isaac Trabue, founder of Punta Gorda,  requested Bishop William Gray to organize Episcopal services in the young town.  For sixty-six years it was a mission.  Albert Gilchrist donated the site and Mrs. Samuel Colt, contributed the funds to construct the building.  The Colt’s only son, Caldwell Hart, drowned in 1893 and this tragedy may have increased Mrs. Colt's interest in the local church.  The name of the church was changed at her request and she added a beautiful Tiffany chancel window in memory of her son.  The original structure circa 1919 served until 1980, when a new building was erected at Henry and Shreve Street.
The first image is believed to be one of the first known photos of the Church of the Good Shepherd taken shortly after its completion in 1986. The second is the church as it looked in 1920, looking north from Cross Street. This view shows the rear of the sanctuary as well as the famed Tiffany Glass window.
Email ThisBlogThis!Share to TwitterShare to FacebookShare to Pinterest
Labels: 1896, Episcopal Church of the Good Shepherd, Henry Street

A one-story frame vernacular residence featuring an H-shaped plan with two forward facing steeply pitched gables.  The roof is clad with  5Vcrimp metal and foundation is concrete block piers.  A one-story rear addition projects from the east elevation centered between the gables.  Based on workmanship and materials, the addition appears to be circa 1930. The exterior fabric is a drop tongue and groove siding.  Fenestration is double-hung wood sash windows with two over two lights. Very few houses of this vintage and construction remain hence its architectural integrity is to an unusually high degree.  8CH1769 and 8CH1768.

One story bungalow residence features a low-pitched front-gabled roof with exposed beams and rafter tails as well as front facing and side gable extensions.  It has a gabled entry porch supported by battered piers and is located along the south elevation wrapping around to the west where it meets a chimney.  An irregular plan and is situated on a brick pier foundation.  Exterior fabric is of simple drop siding and fenestration consists of double hung wood sash windows with four over one lights.  The current owner, Clark Keller, is the second building located on the property which was once a part of the 160 acre homestead of David Youman.a citrus grower.  Clark Keller is currently restoring the house.  Building has only been slightly changed hence integrity is of high level and makes the building a rarity in unincorporated Charlotte County.  8CH0409.

This building had been demolished at this writing in 2021.   It served as a depot along the Atlantic Coast Line railroad.  The parapet had a most distinguished characteristic with a prominent letter "C" displayed at the center.  It also had a raised parapet along the north and south elevations.  It had a dropped- hipped roof extending from the east and north elevations.  The building was declared unsafe and slated for demolition in 2008 (P24 Southestern Archaeological Research, Inc.) 8CH1785

Email ThisBlogThis!Share to TwitterShare to FacebookShare to Pinterest
Labels: 1925, Cleveland, No Longer Exists, The Cleveland Depot 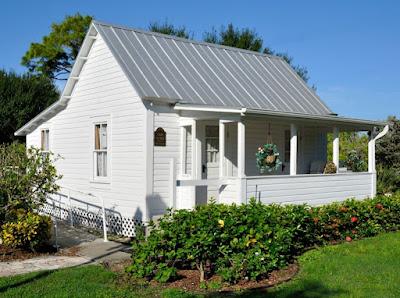 The El Palmetto Cigar Manufacturing Company was organized in 1891.  On the southeast corner of Virginia Avenue and Cochran Street, a wood frame factory and a row of cottages for workers were built.  Each building housed two families.  In 1901 the cigar factory industry in Punta Gorda moved to Tampa and the buildings were sold to D. H. Huckeby, who moved this building to Brown Street.   On October 25, 1924 Cleve Mays purchased the building for $50 and his stepdaughter, Mrs. Elnora Puckett lived in the home for many years.  The building was purchased by Mike Nickelson in 1997.  He donated the building to the Historical Society for placement in the History Park at 501 Shreve Street.  In October 1999, this was the first building moved to the park.

On June 22, 1876  James Lockhart and his wife chose a home site on the south side of  Charlotte Harbor where the city of Punta Gorda is toda...